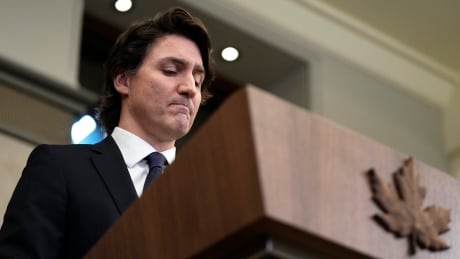 In his most strongly worded statement since the anti-vaccine mandate protests began nearly two weeks ago, Prime Minister Justin Trudeau said Friday that police and all levels of government are preparing now to take action against the demonstrators behind the blockades in Ottawa, Windsor and elsewhere.

invinciblegod
reply
As much as a disagree with the protest’s goal, this is how an effective protest is performed. Sure, it’s less friction if you stand outside a courthouse and raise some signs, but most of the time you don’t get effective results unless you actually shut something down. Now let’s see what the response will be, it will range from giving in to all their demands on one end, a police breakup like the Wall Street protestors in the middle, or at the other end, a repeat of Tiananmen which I obviously don’t think will happen in Canada.

lamontcg
Reminds me of the conservative republican college protest in OG Bloom County and Steve Dallas demanding "bash our heads! bash our heads!"

Chinese Diplomats Started Burning Documents Hours After They Were Ordered to Leave the U.S. by chloe angyal
Wednesday July 22nd, 2020 at 11:39 AM

Want the best of VICE News straight to your inbox? Sign up here.

The U.S. State Department informed Chinese diplomats at 4 p.m. on Tuesday that they had just 72 hours to pack up and leave their consulate in Houston.

Hours later, just after 8 p.m., police and firefighters surrounded the consulate after members of the public reported smoke coming from the building and officials burning documents.

Several witnesses reported some smoke coming from the building but the firefighters and police didn’t enter the building. A Houston Police Department spokesman said the officials would be evicted from the consulate — and a separate compound where many of them live on Almeda Road in the south of the city — by 4 p.m. on Friday.

State Department official Morgan Ortagus said the decision to evict the diplomats was made to protect American intellectual property and the private information of its citizens. It came hours after the Justice Department had accused Beijing of sponsoring criminal hackers who are targeting biotech firms around the world who are working on COVID-19 vaccines. The FBI said the Chinese government was acting like “an organized criminal syndicate.”

The decision to close the Chinese Consulate in Houston is just the latest move in an increasingly bitter Cold War between Beijing and Washington.

The Trump administration has sanctioned diplomats, targeted Chinese state media organizations, and is said to be considering a travel ban for all Communist Party members and their families, a move that would impact 270 million people.

“We have directed the closure of PRC Consulate General Houston, in order to protect American intellectual property and American’s private information,” State Department spokesperson Morgan Ortagus said in a statement Wednesday morning, adding that the U.S. “will not tolerate the PRC’s violations of our sovereignty and intimidation of our people, just as we have not tolerated the PRC’s unfair trade practices, theft of American jobs, and other egregious behavior.”

However, the closure of the Houston consulate was first revealed by Chinese officials on Wednesday morning during a press briefing.

“The unilateral closure of China’s consulate general in Houston within a short period of time is an unprecedented escalation of its recent actions against China,” Wang Wenbin, a spokesman for China’s Ministry of Foreign Affairs told reporters, claiming it was a violation of international law.

Wang said the White House should reverse course immediately, “otherwise China will certainly make legitimate and necessary reactions, beginning with the closure of one of the American consulates in China.

Reuters reported Wednesday that the consulate in Wuhan may be the one to be targeted, though it is unclear if any U.S. diplomats have returned to the building since they were evacuated during the initial coronavirus outbreak in the city in January.

As well as Wuhan, the U.S. has consulates in Shenyang, Shanghai, Chengdu, and Guangzhou — as well as Hong Kong. invinciblegod
reply
Why would any diplomat leave classified correspondence when they have to leave? I'm pretty sure this is par for the course, except for the fact that people usually use shredders (maybe those were too slow?).

They didn’t even tweak it. Just outright copy-and-paste.

They might as well use an apple with a bite out of it, too.

invinciblegod
reply
This is indeed Samsung's presentation screwup, but I don't think they are actually using the icon anywhere. I just checked the Samsung Pass website where they have an eyeball icon, a fingerprint icon, and a "pass" in a blue square icon.

Boris Johnson has been accused of breaking his promise on minimum wage increases just a week after the general election took place.

The Conservatives pledged to hike the minimum wage to £10.50 an hour within five years in its manifesto, but today’s Queen’s Speech includes a cheeky get-out clause.

The increase will now only happen “provided economic conditions allow”.

And with a turbulent break up from the EU on the way, that may prove difficult.

According to independent trade experts Johnson’s Brexit plan will reduce the UK economy by almost 2 per cent.

And even if mitigating trade deals with the US, Australia and New Zealand were somehow agreed at the same time as writing a Brussels deal, the Conservative Party leader’s withdrawal plans would still see UK output decline significantly.

The news will come as a bitter blow for workers who are suffering on wages that are still comparatively below 2007 levels.

Especially the blue collar workers who reportedly backed the Conservatives in their droves during the election.

Chancellor Sajid Javid unveiled in October Tory plans to raise the current National Living Wage rate of £8.21 an hour to £10.50 an hour within five years.

The party said the policy would benefit 4m low paid workers across the country, with some parts of the north set to pocket big increases during the parliament’s five-year term.

“It’s clear it’s the Conservatives who are the real party of labour. We are the workers party,” he told the conference in Manchester in October.

But guidance in Johnson’s Queen’s Speech, which sets out the party’s programme for government, leaves a get-out clause which would allow them to perform a U-turn.

The guidance reads: “The chancellor has pledged that the National Living Wage will increase, reaching two-thirds of median earnings within five years (projected to be around £10.50-an-hour in 2024), provided economic conditions allow).”

Related: The markets know that the only certainty is uncertainty under a Johnson administration

invinciblegod
reply
They deserve what they voted for (nationalism at the cost of individuals).

JimB
reply
Who knew? Boris is not a man of his word.

I’ve seen a copy of Cook’s company-wide email, and the copy reproduced here is accurate. Maciej Ceglowski — who has been in Hong Kong for weeks — responds:

The first allegation is that “the app was being used maliciously to target individual officers for violence”. This makes no sense at all. The app does not show the locations of individual officers at all. It shows general concentrations of police units, with a significant lag.

As the developer and @charlesmok, a Hong Kong legislator, have pointed out, the app aggregates reports from Telegram, Facebook and other sources. It beggars belief that a campaign to target individual officers would use a world-readable crowdsourcing format like this.

Moreover, what are these incidents where protesters have targeted individual police for a premeditated attack? Can Mr. Cook point to a single example? Can anyone? […]

So not only is there no evidence for this claim, but it goes against the documentary record of 18 weeks of protests, and is not even possible given the technical constraints of the app (which tracks groups of police).

The second, related allegation is that the app helps “victimize individuals and property where no police are present”. Again, does Mr. Cook have any evidence for this claim? The app does not show an absence of police, it shows concentrations of police, tear gas, riot flags etc.

So, three questions, no answers:

invinciblegod
reply
"related allegation is that the app helps “victimize individuals and property where no police are present”. Again, does Mr. Cook have any evidence for this claim? The app does not show an absence of police, it shows concentrations of police, tear gas, riot flags etc."

If the app shows where the police are, doesn't it also show where they aren't?

invinciblegod
I think the point is to avoid riot police. They have and will just overwhelm a couple police officers. Of course, you are right, it really depends on the accuracy of the sources.

sirshannon
“victimize individuals and property where no police are present” is the new "travel through a city without getting stuck in a protest."

Samsung has a long and illustrious history of trolling Apple in its smartphone commercials. But now the South Korean firm is cloning one of the iPhone features it once mocked, and has quietly deleted records of the ads.

∞ Read this on The Loop

invinciblegod
reply
I've come to treat loopinsight as pro Apple propaganda. Look how for other companies it is always condescension while for Apple, if they make mistakes, it is always understanding that Apple is improving. Just look at the coverage for the Home Assistant employee listening for the Homepod vs the Google assistant.

martinbaum
This just occurred to you? Dalrymple is more of a lapdog than even Gruber.

invinciblegod
I think Gruber is okay, although he is partial to Apple, at least he has deep analysis and can predict future direction but Dalrymple is just a Yes man except when it comes to music. If you hear the podcasts where he and Gruber are discussing, Dalrymple never has any tech opinions besides from the one time Apple deleted his music. In other words, if it doesn't personally affect him, he doesn't even know the issues. Just look at this current post and all his other posts. I guess he is a very good people person at WWDC otherwise I don't see why Gruber would ever invite him to his podcast. Dalrymple is just so shallow.